10 days Fly and Drive in Romania

"This tour is a great opportunity to discover Romania, its people, food and traditions..."

✓ Free cancellation up to 30 days before departure

The next start dates

This program runs only by request 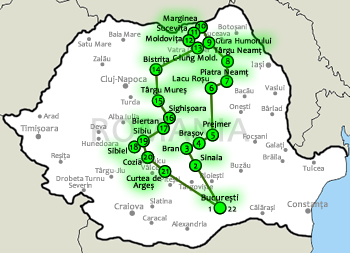 Arrival at Bucharest. Pick-up the rented car from the airport and drive to your hotel. Overnight in Bucharest.

Day 2 | Bucharest and its treasures

Panoramic tour, including the Romanian capital’s highlights: Parliament Palace, Revolution Square, Romanian Athenaeum, Royal Palace, Arch of Triumph, Victoriei Avenue, etc. Bucharest is a capital city full of contrasts, which actually makes it an interesting destination to most of the travelers. The architectural heritage certainly reminds of Paris, with our famous Arch of Triumph that looks just like the one from Champs Elysees ! Bucharest is interesting and ready to be discovered, with live atmosphere both during daytime and also during the evenings, with its many restaurants and bars, where you can fully taste our ordinary life. Bucharest is a city with many features. It’s a city that combines the old with the new, a city of contrasts with old districts packed with beautifully old buildings, a city where even a sad face can smile at you. Despite the many changes brought by the dictatorship from the former regime, Bucharest has still kept some places that remind of the «little Paris», how was once called. Visit Village Museum, one of the largest open air museums in Europe. Free time in the afternoon to discover on your own the old city centre (pedestrian area). Overnight in Bucharest.

After breakfast, drive to Prejmer where we visit Prejmer Fortified Church, one of a series of UNESCO-listed historic churches in Romania and is known for being the largest church of its kind in south eastern Europe. Built from 1212 and completed in 1225, Prejmer Fortified Church was a construction of the Roman Catholic Teutonic knights. Drive along the pittoresques villages from situated at the crossroads of Transylvania and Moldova. Continue to Lacu Rosu ( the Red Lake ) resort for visit / photo stop. Drive along the Bicaz Lake and its impressive dam, to admire the scenic view. Cross the Bicaz Gorges – on foot, if weather is fine. Overnight in a centrally located hotel in Piatra Neamt.

Today we will drive along the Moldavian villages, admiring unique landscapes and learning about local traditions. Visit Agapia monastery – the greatest monastic complex. Neamt County is an area blessed with many touristic sites: Century-old monasteries, fascinating museums, fortresses and strongholds as well as many natural parks ideal for hiking and wild-life watching. Visit Neamt monastery, the oldest in Romania, dating from the 14th century, which was an important cultural centre and an example for all Moldavian churches. Monasteries Neamt - the oldest in eastern Romania (Moldova) and Agapia – featuring by Romania’s best known painters: Nicolae Grigorescu at Agapia Monastery, the Ceahlau Mountain - also known as The Athos of Romanian Orthodoxy. Visit Voronet Monastery (UNESCO heritage) called "the Sixtine Chapel of the East", due to its interior and exterior wall paintings, this monastery offers an abundance of frescoes featuring an intense shade of blue commonly known as "Voronet blue". This monastery is the most important in Bucovina, being one of the symbols of Bucovina. Overnight in a centrally located hotel in Gura Humorului.

Full day in Bucovina to discover the most important treasures that this area can offer to you, visitors: the painted monasteries. Drive to Marginea, a village very famous for its black pottery. This pottery kept for essence the features which it had with the Neolithic era: the form remains unchanged as well as the technique of cooking and ornamentation. This pottery is of indigenous, Dacia tradition and one finds it on territory of Moldavia and of the east of Transylvania. It acts of only village having perpetuated this tradition. The most picturesque treasures of Romania are the Painted Monasteries of Bucovina. Their painted exterior walls are decorated with elaborate 15th and 16th century frescoes featuring portraits of saints and prophets, scenes from the life of Jesus, images of angels and demons, and heaven and hell. Deemed masterpieces of Byzantine art, these churches are one-of-a-kind architectural sites in Europe. Far from being merely wall decorations, the murals represent complete cycles of religious murals. The purpose of the frescoes was to make the story of the Bible and the lives of the most important Orthodox saints known to villagers by the use of images. Their outstanding composition, elegant outline and harmonious colors blend perfectly with the surrounding landscape. Whether you are interested in religion, history, art or architecture, you will be intrigued by the construction and decor — exterior and interior — of these edifices. Visit Sucevita Monastery (UNESCO heritage), built between 1582 and 1584; this one was built before the advent with the throne of the one of these princes. Visit Moldovita Monastery (UNESCO heritage) – built 1532 – 1537. One of the scenes most suggestive of the monastery of Modolvita is that of the "Seat of Constantinople", monumental composition, the subject seems you it was treated only in Moldavia (Bucovina). Visitors to the Painted Monasteries will often witness a nun or a monk beating a long beam with a mallet, tapping out a call to prayer. The tradition started during the siege of Moldova by the Ottoman Empire when the Turks forbade the ringing of bells. The striking of wooden or metal bars, known as toaca, replaced the ringing of bells and thus, became a tradition, reinforced by the fact that in times of war, bells were often melted down to make cannons. Overnight in a centrally located hotel in Gura Humorului.

We leave Bucovina and we head to Transylvania, passing by Borgo pass and Bistrita, an area covered with vampires stories. We stop in Campulung Moldovenesc to visit Wooden Museum. Drive to Bistrita. In Bram Stoker's novel, Dracula, a young Englishman, Jonathan Harker, visits Bistrita and spends a night at the Golden Krone Hotel (Hotelul Coroana de Aur) on the eve of St. George’s Day before continuing his journey east to Count Dracula’s castle. Although no such hotel existed when the novel was written, a hotel with the same name has since been constructed for visitors. Arrival in Targu Mures, that became a modern town in the second half of the 19th century, along with the expansion of the railway line. Today its centrally located Piata Trandafirilor (Roses Square) is lined with modern street side cafes and restaurants, churches, and monuments. Visit Targu Mures' top attraction, located at the south end of the square: the Culture Palace (Palatul Culturii), a flamboyant early 20th-century city hall with an outstanding stained-glass hall, housing some of main local museums. Visit the old fortress built by prince Stephan Bathory in 1492. A few of the original elements have been preserved, among them wall fragments on the Southern and Western sides, the tower on the Southern wing, attached to the furriers’ bastion, and ruins of the South-Western tower, included nowadays in the tanners’ bastion. The structure of these towers and the fact that they are square-shaped are indicative of a medieval type military architecture. Drive to Sighisoara, the best preserved medieval citadel in Europe (UNESCO heritage). Overnight in a charming hotel in Sighisoara.

In the morning, discover the best preserved medieval fortress in Europe: Sighisoara. Founded by Transylvanian Saxons during the 12th century, Sighisoara (Schassburg in German) still stands as one of the most beautiful and best-preserved medieval towns in Europe. Designated as a World Heritage Site by UNESCO, this perfectly intact 16th century gem with nine towers, cobbled streets, burgher houses and ornate churches rivals the historic streets of Old Prague or Vienna for atmospheric magic. It is also the birthplace of Vlad Dracula, also known as Vlad Tepes (Vlad the Impaler), ruler of the province of Walachia from 1456 to 1462. It was he who inspired Bram Stoker's fictional creation, Count Dracula. His house is just one of the many attractions here. Others include the Church on the Hill with its 500-year-old frescoes, the Clock Tower with its weapons museum, the 13th century Venetian House and the Church of the Dominican Monastery, known for its Transylvanian renaissance carved altarpiece, baroque pulpit, Oriental carpets and 17th century organ. Drive to Biertan to visit its impressive Gothic fortified church (UNESCO heritage). Arrival in Sibiel village that received the Golden Apple Award in 2010. The greater part of the villages in this area preserved strong spiritual and ethno-folkloric traditions. Although modern constructions progressively replaced the old and traditional ones, the atmosphere in Sibiel remained unaltered. According to Forbes, this is the most romantic ecotouristic area in the World. Visit the glass icons museum in Sibiel. Overnight in a centrally located hotel in Sibiu.

Guided walking tour of the medieval town of Sibiu (the Main Square, the Evangelical Church, the Liars' Bridge etc.). Sibiu - once one of the easternmost cities of the glittering Hapsburg Empire was European Cultural Capital in 2007. Nine centuries of cultural treasures await discovery. We cross the gorges of the river Olt. Right before the entrance in the gorges, we stop at Cozia, to visit the church built by Vlad’s grandfather, Mircea the Old, on the shore of the river. Departure to Curtea de Arges, the former capital of Wallachia. Visit the Episcopal Church (built 1512-1517) where the Romanian Kings are buried. Arrival in Bucharest. Overnight in a centrally located hotel.

Free time for shopping. Drive to Bucharest airport. Drop off the car. End of our services.

SERVICES INCLUDED IN THE PRICE

Private vehicle, classified, without driver / 10 days as per the above program.

All local taxes / 9 pieces as per the above program.

OPTIONAL SERVICES (TO BE ADDED TO THE PRICE)

Hotel 3*/4* / 9 nights as per the above program.
Price supplement: from 220&nbspEUR/person/product.

SERVICES NOT INCLUDED IN THE PRICE

This program runs only by request!.
If you are interested in participating, please send us the following details and we'll answer you right away!

Overall tour ratings based on 748 reviews

Please read below our answers to the most frequently asked questions about this tour.

Q: What vehicle will be used?

Q: What if the tour is cancelled by any reasons?

Q: What if I get injured during this tour?

Do you have a question?

Before you decide to book this tour, it is goog for you to know the information below.

Before you decide to book this tour, please read the detailed information below.