A taste of Transylvania

"This tour is a great opportunity to discover Romania, its people, food and traditions..."

✓ Free cancellation up to 30 days before departure

The next start dates

This program runs only by request 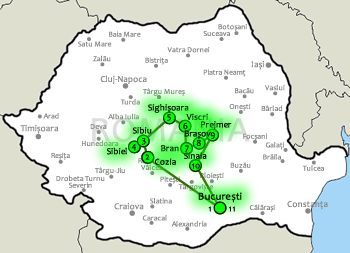 Arrival in Bucharest. Check in at the hotel. Meet your English speaking guide and start sightseeing tour in Bucharest, including the most interesting sites in Bucharest, like The Parliament’s Palace, also known as The People’s House, the second largest building in the world, after Penthagon, The Revolution Square, The Opera Square, Victoria Ave and the Triumphal Arch. Overnight in Bucharest.

After breakfast, visit Village Museum, one of the largest open air museums in Europe. Drive towards Sibiu, following Olt Valley. Visit the 16th century church Cozia built by Vlad Dracula’s grandfather, Mircea the Old, on the shore of the river. Arrival in Sibiu. A visit to Sibiu is a „must” as this was the European Cultural Capital in 2007. We suggest you take an incursion in the medieval center who has been very well preserved: the Big Square, where in past times big reunions and executions took place, the Catholic and Orthodox Churches, the fortifications, etc. Overnight in Sibiu.

Drive to Sibiel, an unique village that has received Golden Apple prize. We discover the village and visit the Icons glass Museum. Take your time to walk and to see the traditional way of living in Romania. Drive to Sighisoara, the best preserved medieval citadel in Europe. Designated as a World Heritage Site by UNESCO, this perfectly intact 16th century gem with nine towers, cobbled streets, burgher houses and ornate churches rivals the historic streets of Old Prague or Vienna for atmospheric magic. It is also the birthplace of Vlad Dracula, also known as Vlad Tepes (Vlad the Impaler), ruler of the province of Walachia from 1456 to 1462. It was he who inspired Bram Stoker's fictional creation, Count Dracula. His house is just one of the many attractions here. Others include the Church on the Hill with its 500-year-old frescoes, the Clock Tower with its weapons museum, the 13th century Venetian House and the Church of the Dominican Monastery, known for its Transylvanian renaissance carved altarpiece, baroque pulpit, Oriental carpets and 17th century organ. Overnight in Sighisoara.

In the morning, drive to Viscri. Visit Viscri Fortified Church witch is one of a series of UNESCO-listed historic churches in Romania. The village of Viscri is famous for the fact that King Charles has bought 2 properties here. Visit a local blacksmith that keeps alive the old traditions in this unique village. Drive to Bran to visit the famous medieval castle built as a fortress - The "Dracula's" Castle – for the citizens of Brasov with view to defence the city. Prince Vlad used the Castle as a general headquarters during his incursions in Transylvania . For many years, it has been an interesting medieval art museum. Surrounded by an aura of mystery and legend and perched high atop a 200-foot-high rock, Bran Castle was built on the site of a Teutonic Knights stronghold dating from 1212 and it was first documented in an act issued by Louis I of Hungary on November 19, 1377, giving the Saxons of Kronstadt (Brasov) the privilege to build the Citadel. Transfer to Brasov, ancient Kronstadt. Fringed by the peaks of the Southern Carpathian Mountains and resplendent with gothic, baroque and renaissance architecture, as well as a wealth of historical attractions, Brasov is one of the most visited places in Romania. Overnight in Brasov.

Walking tour through the old town centre: the Black Church, the Council Square, the Hirche House, the baroque style buildings from the Austro-Hungarian times, Black and White Tower. Visit First Romanian School. Believed to have been built in 1495 (and then rebuilt a century later), this was once the only school in Transylvania. It was in use until the end of the 19th century and is today a tiny but perfectly formed museum. It's estimated that some 1,700 students from the surrounding villages were educated here. Stored here are Romania's first printing press, the first Romanian bible, a few 12th-century school books, a slew of books dating from the 14th century, and even sheet music from composer George Enescu. Next to the school is St. Nicholas Church, well worth a visit for its beautiful frescoes .Drive to the small village of Prejmer. Visit the largest fortified church in southeastern Europe. Prejmer fortress (UNESCO heritage) was built by Teutonic knights in 1212-1213. The powerful surrounding walls are 40 feet high and 10-15 feet thick. Historical records attest that in its 500 years of existence, the fortress was besieged 50 times. However, it was only captured once, in 1611 by Gabriel Báthori, Prince of Transylvania. Overnight in Brasov.

We head to Sinaia following the scenic Prahova Valley – arrival in Sinaia, called “Pearl of the Carpathians” due to the beauty of its natural setting and the elegance of its architecture. Visit the summer residence of the first royal couple, King Carol I and Queen Elisabeth, Peles Castle, one of the most beautiful palaces in Europe. Walking tour in the old city centre in Bucharest. The tangle of cobbled streets and alleys of this district reminds undoubtedly Paris. It is nice to walk through the little streets if you want to soak up the old Bucharest life. Visit Stavropoleos church. The Church of the Stavropoleos monastery, located in the old center of Bucharest, was completed in 1724 by the Greek monk Loanikie that later became Metropolitan of Stravropola. This is an example of Brancoveanu style, medallions depicting saints decor, floral arabesques painted on the walls and stone laces. We will admire the old architecture in the Lipscani district, including the house that hosts Manuc Inn. Free time for shopping. Overnight in Bucharest.

Transfer to Bucharest airport. End of our services.

SERVICES INCLUDED IN THE PRICE

Transfer (between airport and hotel)Car/Minibus (depending on group size)

Private vehicle, classified, with certified driver / 2 pieces as per the above program.

Private transportCar/Minibus (depending on group size)

Private vehicle, classified, with certified driver / 1 pieces as per the above program.

Certified national guide / 1 pieces as per the above program.

All tourist attractions included in the program / 1 pieces as per the above program.

All local taxes / 1 pieces as per the above program.

SERVICES NOT INCLUDED IN THE PRICE

This program runs only by request!.
If you are interested in participating, please send us the following details and we'll answer you right away!

Overall tour ratings based on 748 reviews

Please read below our answers to the most frequently asked questions about this tour.

Q: What vehicle will be used?

Q: What if the tour is cancelled by any reasons?

Q: What if I get injured during this tour?

Do you have a question?

Before you decide to book this tour, it is goog for you to know the information below.

Before you decide to book this tour, please read the detailed information below.